Two SALE toys, cruelly rejected by the buying public because they are different… plan a daring escape and end up somewhere unexpected… and quite wonderful. 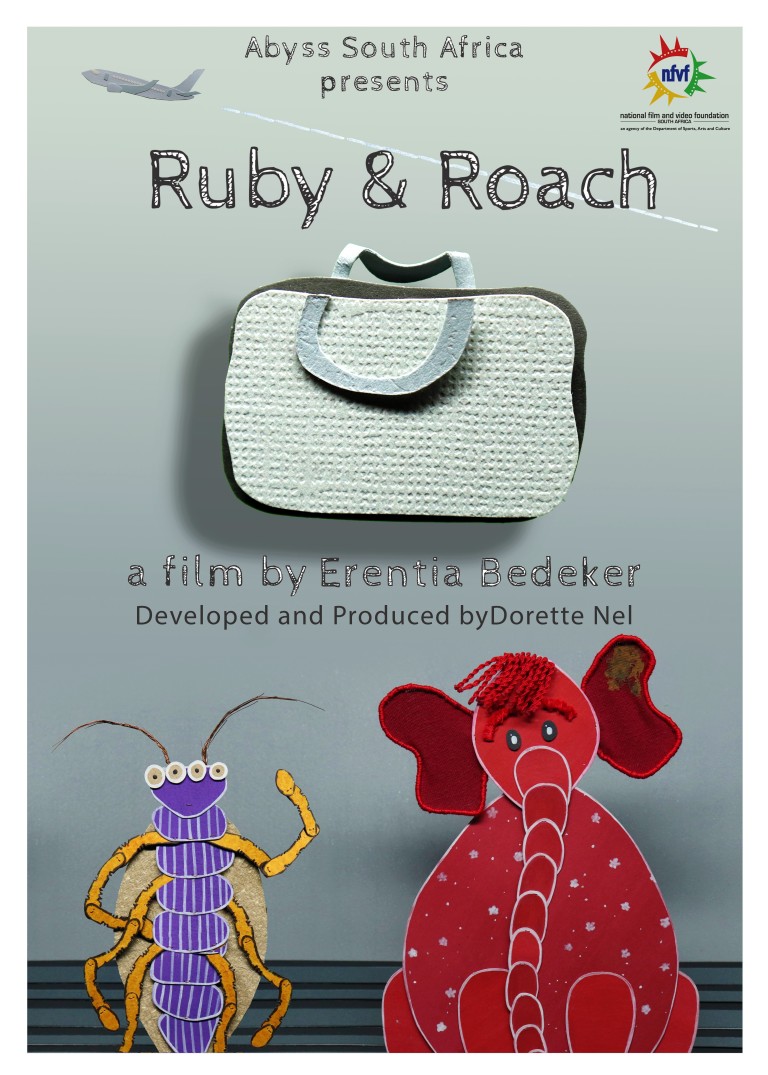 In an airport, where a flood of anonymous faces hurry by, and airport stores’ shelves are stacked with dozens of identical products – coveted for no reason at all – lives Ruby and Roach, two SALE toys.

Discarded to the top shelf, and kept out of sight because they are different, they seem fated to stay behind as all the other toys find their forever homes.

Each day they groom themselves. Ruby fluffing her grey fringe extra buffy to hide the stain, and Roach combing his creepy feelers into something resembling a fringe and tucking them in behind a leg.

Sometimes they get lucky and someone takes them off the shelf for closer inspection. But they’re soon put back. Ruby because of her stained ear and Roach… well… When he gets over excited or tense, his legs start shivering and bam! His feelers jump out, scaring people off.

One day, someone’s trolley, loaded with suitcases, bumps into the shelves. Ruby, tired of her dreary life, decides to take action and jumps into an open bag onto the trolley.

Roach, in a moment of sheer panic, closes his eyes with his feelers and jumps after her. But before the duo can climb out of the bag, someone shoves a jacket over them and zips the bag closed, trapping them.

After a short trip in complete darkness, the bag goes through airport security scanner. On screen Roach’s feelers resemble wires of a bomb and… bam! They trigger a bomb scare.

The bomb squad arrives. After closer inspection they decide Ruby and Roach are harmless and toss the seemingly worthless toys into a dustbin. Freedom at last! Until a dark shadow is cast over the bin…

Soon Ruby & Roach find themselves on a rubbish dump with many other items discarded by society. All seems lost till a little girl who lives on the dump, discovers them…

It’s a story laden with metaphor about prejudice in society, as well as the generic, mass manufactured nature of the things.

Bedeker studied at the University of Stellenbosch where she received a bachelor’s degree in Acting and an honour’s degree in Afrikaans and Dutch. She is also a published poet, freelance puppeteer, and performer with a post-grad in education.

She is one of the directors of Wreckless Creative, a two-man graphic design and animation studio. Most of her work is done as independent animator. Bedeker prefers working with stop motion animation. Although it is more time consuming and labour intensive, she enjoys crafting the characters and story worlds and allowing them to take on a life of their own. In stop motion the medium you work with dictates what you can and cannot do. These restrictions force the animator to think out of the box and often lead to fascinating and unique results.

She worked behind the scenes in 2019 on “Takalani Sesame” as PUPPET WRANGLER and is currently working on her fourth animated short film.

As an experienced story & script editor & writer Nel does more than wrestle words. She was selling tickets to her self-conceptualized back-yard concerts long before she hit the school benches. Her passion for entertaining people, lead her to content development and script writing.

She has worked in various genres of live action television and has been a crucial member of the writing team of Africa’s longest running, most popular daily, “Generations, The Legacy” for five seasons; as well as its predecessor “Generations”.

She recently completed a sitcom series “Umuzi Wabadala” and 13-part drama for DSTV channel 157, Moja Love; produced a short, animated film aimed at the art circuit, “Ruby & Roach”, and is developing an animated series for tweens with the support of the National Film & Video Foundation of South Africa, “Spling-Go & Friends”.

She currently serves as script editor for an animated series from the camp of Fopspeen Moving Pictures, “A Little Bird Told me”.

And is story-slash-script editing Emma Lungiswa De Wet’s new animated series in development with the support of the National Film & Video Foundation of South Africa.

Nel’s first venture into animation as writer-producer led to the short film “Ruby & Roach”. This film won Best South African Short Film and Best African Short Film at the Durban International Film Festival 2020 and has been travelling the globe, being screened at various festivals.

Mart-Marie Snyman is a full time performer, arranger, musical director, recording artist, composer, and piano teacher based in Pretoria, South Africa. She obtained a BMus in Performing Arts from the University of Pretoria with distinction, being one of a few pianists in the country specialising in classical, jazz, and contemporary piano. She was the runner-up in the Lionel Bowman Beethoven Piano Competition and received various bursaries from the Southern African Music Rights Organisation (SAMRO), including the prize for the best performance of a South African composition at the UNISA South African Scholarship Competition in 2009.

She performed all over South-Africa, with the electronic fusion group FOXTROT, well-known singer-songwriter Anna Davel, and in various jazz and classical productions. Her new project, the Mart-Marie Snyman Ensemble, is due to launch in September 2020. She made her international debut in 2016, accompanying famous South African singer Karin Hougaard throughout Europe during the festival Fees van die Afrikaanse.

Mart-Marie works closely with visual artist Diek Grobler and has written music for several animations, including works for ATKV Film Verse 2 which premiered at various national and international festivals. Mart-Marie is endorsed by Werner Stolze Pianos.

Siobhan Lloyd-Jones is a versatile violinist. She plays a wide variety of styles including folk, jazz and classical music. She has her diploma in classical violin performance as well as a Btech degree in jazz training. Siobhan has attended jazz workshops and recieved master classes from world renowned jazz violinist Tim Kliphuis. She has also played with numerous orchestras and travelled with the MIAGI youth orchestra to Europe a couple of times. She is currently a member of the Gauteng Philharmonic Orchestra and performs in a string quartet called AVO. Siobhan is a jazz lecturer at TUT and is involved in ensemble instruction and individual jazz lessons. Siobhan also sings and writes songs in her spare time for a band called FOXTROT.

Sechaba Morejele is an actor, director, scriptwriter, producer. Proud to be his own boss, he has a strong track record, having worked in the TV and Film industry for over fifteen years. He got his BSc. Degree in Statistics at the University of Manchester in 1984 and worked for four years as a Statistician in England and then at Eskom in South Africa before giving it all up to pursue a career in the film industry.

In 1999 Sechaba enrolled at the American Film Institute (AFI), in Los Angeles to do an MFA in Film Directing where his thesis film, Ubuntu’s Wounds,that he wrote and directed, won numerous awards, including the prestigious Franklin J. Schaffner award for directing the best thesis film from his year; Best Short Film at the Pan African Film Festival in Los Angeles and The Director’s Guild of America (DGA) Student Award for outstanding achievement in Directing.

As a writer Sechaba has written extensively, writing dramas, documentaries, educational shows, sitcoms, and one feature film (Tasha – A film based in Lesotho). Such writing projects include Ubuntu’s Wounds, Hola Mpinji, Generations, Isidingo, 99 Plein Street, Soul City TV & Radio, Kelebone, Choice, Switch onto Science, An IEC radio drama, and he was Head Writer on Mponeng, to mention a few.

Established in 2004, Fopspeen Moving Pictures has made, amongst many other things, four animated short films, which have travelled the international festival circuit extensively, winning four international prizes, a SAFTA award and nomination.

Fopspeen is an Afrikaans word for a baby’s dummy, or pacifier. A baby sucks on it to calm down, or as a substitute for the real thing. Art is a dummy or pacifier for life.